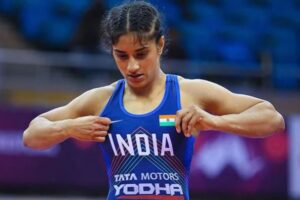 The Wrestling Federation of India temporarily suspended Vinesh Phogat on Tuesday for indiscipline after her return from Tokyo Olympics campaign. It is said that she has refused to train with the rest of the athletes at the Olympics Village and also did not wear the name of the official kit sponsors of Team India at the Olympics.

WFI also issued notice to young wrestler Sonam Malik for misconduct. Vinesh, who was knocked out of the Tokyo Olympics in the quarterfinals after a crushing defeat by ‘fall,’ has been given time until August 16 to respond to the notice, which charges her with three counts of indiscipline.

According to WFI, “This is gross indiscipline. She has been suspended temporarily and barred from all wrestling activities. She can’t compete in any national or other domestic event until she files a reply and WFI takes a final decision.”

Vinesh had declined to stay at the Games Village and practise with the rest of the Indian squad after travelling to Tokyo from Hungary where she had trained with coach Woller Akos. She also chose to wear a Nike singlet during her bouts instead of the official sponsors of the Indian contingent, Shiv Naresh.

Officials in Tokyo informed PTI that Vinesh created a ruckus when she was assigned a room near that of her Indian teammates Sonam, Anshu Malik, and Seema Bisla, claiming that she would get coronavirus because these wrestlers had travelled to Tokyo from India.

An official said that, “She did not train with any of the Indian wrestlers. It appeared as if she had come with the Hungary team and had nothing to do with the Indian contingent. One day her timing clashed with the training timings of the Indian girls and she chose not to train at the same arena with them. This is not acceptable. This is not how senior wrestlers are supposed to behave.”

The official further added that, “These kids think, they have become star wrestlers and are entitled to do anything. Before leaving for Tokyo either Sonam or her family are supposed to collect their passport from the WFI office. But she ordered SAI officials to collect on her behalf. This is not acceptable. They have achieved nothing and are showing attitude. This will not be accepted.”

Indian Goalkeeper Amrinder Singh Urges Not To Tag Him! 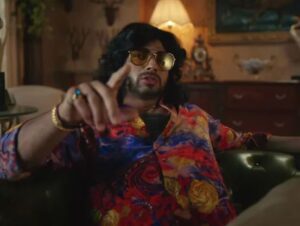 Neeraj Chopra made India proud by winning the gold medal in the Tokyo Olympics 2020 in the men’s javelin throw. Today, he surprised his fans in India by showcasing his acting skills in an advertisement for a famous credit card payment application. He became one of the most sought after marketable sporting icons in India.

In the advertisement, one could see Indian actor Jim Sarbh and later Neeraj Chopra created magic. At the end of the video one could hear to the song, “Javelin Meri Aakhon Mein, Javelin Meri Saanson Mein.”

Neeraj Chopra is a Junior Commissioned Officer (JCO) in the Indian Army, Chopra is the first track and field athlete to win a gold medal for India at the Olympics. He is also the first track and field athlete from India to win at the IAAF World U20 Championships, wherein in 2016 he achieved a world under-20 record throw of 86.48 m, becoming the first Indian athlete to set a world record.

Neeraj Chopra participated in the 2018 Commonwealth Games and the 2018 Asian Games, serving as the flag-bearer in the latter and winning gold medals in both. In his debut at the 2020 Tokyo Olympics, Chopra won the gold medal on 7 August 2021 with a throw of 87.58 m in his second attempt. As of 2021, he is one of only two Indians to have won an individual Olympic gold medal as well as the youngest-ever Indian Olympic gold medalist in an individual event and the only one to have won gold in his Olympic debut.