You are here: Home / Entertainment / Shankar’s Daughter To Marry Cricketer 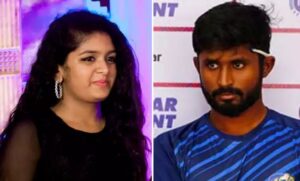 Ever since the coronavirus pandemic has started, we are hearing to the news of marriages of stars. Tollywood, Bollywood and other film industries’ actors are announcing their wedding news.

According to the latest reports, South Indian director, Shankar’s daughter is going to marry. It is said that Shankar’s eldest daughter, Aishwarya Shankar is going to marry TNPL cricketer, Rohit Damodaren. Rumours are doing the rounds that the wedding of Aishwarya and Rohit are going to marry on June 27th in Mahabalipuram. Rohit Damodaren is the son of popular industrialist Damodaren who owns the Madurai Panthers Cricket team. Rohit is the captain of Panthers Cricket team as well. Shankar’s daughter is a doctor by profession. Due to the coronavirus pandemic, wedding is going to take place amidst close friends and family members. Reports claim that a grand reception is going to be conducted in a gran manner post covid.

Shankar is an Indian filmmaker who predominantly works in Tamil cinema. He made his debut as a director in the film Gentleman (1993), for which he won the Filmfare Best Director Award and the Tamil Nadu State Film Award for Best Director. He is one of the highest paid film directors of India, well known for extensive use of visual effects, prosthetic makeup and state-of-art technology in songs.