You are here: Home / Entertainment / Sai Pallavi In A Web Series! 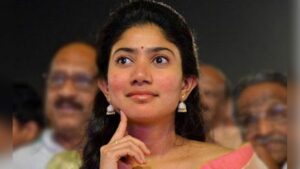 South Indian actor, Sai Pallavi is an incredible actor! Any doubt in it? Obviously, a big No. She lives in her actor and impresses audiences not only with her stupendous acting skills but also with her fabulous dancing skills. She earned an immense fan following in the south Indian.

Now, most of the stars are making a debut on digital media. We have seen Bollywood celebs Ajay Devgn, Shahid Kapoor and many other stars stepping into digital arena. It is all known knowledge that Victory Venkatesh and Rana Daggubati are also going to make their digital debut soon. Now, the news is that Sai Pallavi is also planning to do a web series. Recently, the actress, as a part of her Love Story movie promotions said that she is listening to a script of a web series and very soon will take a decision on it. She said that she is also getting offers form Tamil, Malayalam and Hindi film industries. After Love Story, she didn’t give green signal to any movie and said that she is listening to the scripts for some big films.

Coming to Love Story, she said that Shekar Kammula directed the film with much honesty and her character will be remembered just like Bhanumati in Fidaa.