You are here: Home / Trending / Russian Students Jump Out Of Windows To Save Their Lives!

Russian Students Jump Out Of Windows To Save Their Lives! 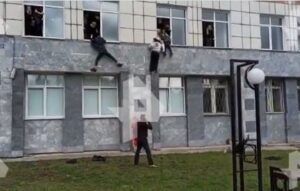 A man walked on to the Perm State University (PSU) campus in Perm Krai region on Monday morning and started shooting. The incident took place at around 11:00 (06:00 GMT) at Perm State University, located around 1,300 kilometres east of the capital, Moscow, in the Urals.
In the shooting, at least eight people were killed and many others injured. According to the reports, his identity was established and was arrested. He has been identified as the 18 year old student at the university. Here is the video and see how students are jumping out of the windows to save their lives.

#Breaking
The gunman attacked a university in Perm, #Russia. Reported deaths and injuries. Faculty and students were filmed jumping out of windows pic.twitter.com/QHN4trtCl3

Some of the students were jumping out of the windows to save their lives during the time of shooting whereas few others locked themselves inside the classrooms.
Ivan Pechischev one of the professors at the university said that, “One of the students told me that it was a shooting. I heard pops, everyone began to scatter in different directions. I went to my students in the second building and continued to hear the pops.”