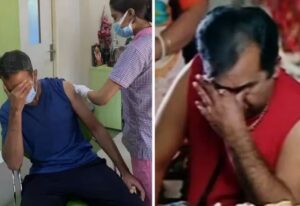 Most of the people are taking coronavirus vaccination. Top director, Prashanth Neel took to his Twitter and announced that he finally got vaccinated. He tweeted that, “If you haven’t, please do book a slot and get your family and yourself vaccinated.” Here is the tweet made by Prashanth.

Raveen Tandon replied to the tweet as, “Haha this is so cute Prashanth! Should’ve seen my vaccine video. For all our bravado!”

To which Prashanth replied as, “Mam maybe we should see that video, that might motivate everyone. Since mine hasn’t clearly”.

See how netizens are reacting to Prashanth Neel’s post.

On the professional front, Prashanth Neel and Prabhas have joined their hands together for the film, Salaar. The shooting of the film halted due to coronavirus pandemic. On the other hand, Prashanth Neel will be making a movie with Jr NTR. On the occasion of Tarak’s 38th birthday, Prashanth Neel announced his next film with the actor, which has been tentatively titled NTR 31. For the first-time Prashanth and Jr NTR have come together.