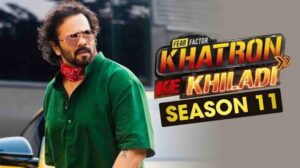 The most popular show, Khatron Ke Khiladi 11 is going to end soon. Most of the fans are eagerly waiting to know about the winner of the show.

According to the reports, Divyanka and Arjun are likely to be the top 2 contestants and who wins the trophy is the question. Some of the reports claim that Arjun Bijlani is going to win the the title whereas Divyanka is emerge out as the runner up.

Khatron Ke Khiladi 11 finalists and host Rohit Shetty will be seen promoting the KKK11 on Madhuri Dixit’s Dance Deewaane 3. Bharti and Haarsh will be hosting the show. Bollywood actor Shah Rukh Khan and Gauri Khan – one of the most adorable couples in the film industry. Over three decades, they have seen many problems but they stayed together. Shah Rukh Khan fell in love with Gauri Khan when he was 18. Both of them reportedly met in Delhi at a party. Both of them spoke for five minutes and he has got Gauri’s number. They dated for many years and finally in 1991, SRK married Gauri.

At one point of time, Gauri and Shah Rukh fought with each other and Gauri without informing SRK went to Mumbai from Delhi. One more interesting news, is that Gauri Khan didn’t want Shah Rukh Khan to act in movies and she even prayed for SRK’s movies to flop so that they could leave Mumbai. But, later she not only supported SRK but also started a production company. Both of them endorse several leading brands in commercials.

Shah Rukh Khan is one of the persons who gives much importance to his wife and never steps back to celebrate Gauri Khan’s milestone moments.

After six years of their wedding, the couple have been blessed with their elder son, Aryan and later Suhana was born in 2000. In 2013, the couple became parents to AbRam Khan through surrogacy.

Gauri Khan in an interview said that she respects SRK’s religion and it doesn’t mean that she should become a muslim. She quoted, “There is a balance, I respect Shah Rukh’s religion but that doesn’t mean that I would convert and become a Muslim. I don’t believe in that. I think everybody is an individual and follow their religion. But, obviously there should be no disrespect. Like Shah Rukh would not disrespect my religion as well.”

In another interview, SRK shares an anecdote from his and Gauri’s wedding day. SRK said, “I remember, when their whole family, old-fashioned people, I respect them all and respect their beliefs but at that time, in that old-fashioned reception, all of them were sitting there when I came in at 1:15, whispering “Hmmm.. He’s a Muslim boy. Hmm.. Will he change the girl’s name? Will she (Gauri) become a Muslim?”

Shah Rukh Khan deciding to play a prank at that very moment, had said, “So, I looked at the time and said, ‘Okay Gauri, put on your burkha and let’s read the namaaz now’. The whole family stared at us wondering if I had changed her religion already. So I told them, ‘From now on she will wear a burkha all the time, she won’t ever leave the house and her name will be changed to Ayesha’.”

SRK further stated, “The lesson in all of this was that one should respect religion but it should not come in the way of love.” Bollywood beauty Malaika Arora is celebrating her birthday today. Fans and friends are wishing her on the occasion of her birthday. But what grabbed our attention is the special birthday wish from her boyfriend, Arjun Kapoor. He shared an adorable pic in which one could see Malaika kissing Arjun Kapoor. Sharing the pic, he wrote, “On this day or any other all I want is to make you smile…May this year you smile the mostest…”

The birthday celebrations of Malaika will be low key. Last night, Malaika was snapped arriving at Arjun Kapoor’s house.

Malaika Arora is an Indian actress, dancer, model, VJ, and television personality who appears in Hindi movie. Malaika acted in various films. As a dancer, she created her mark with her performances in the songs Chaiyya Chaiyya, Gur Naalo Ishq Mitha, Maahi Ve, Kaal Dhamaal, and Munni Badnaam Hui.

Malaika was born in Thane, Maharashtra. Her parents divorced when she was 11 years old and she moved to Chembur with her mother, and sister Amrita. Her mother, Joyce Polycarp, is a Malayali and her father, Anil Arora, a native of Punjab.

Malaika was married to Arbaaz Khan in 1998 and in 2016, they have announced their separation citing compatibility issues. Now, the actress is dating Arjun Kapoor. We all know that WhatsApp Chats are end to end encrypted and it means the sender and receiver can only read the messages, not even WhatsApp. Then how come all the WhatsApp chats of the persons involved in Bollywood scandal come out. In 2020, WhatsApp chats belonging to Bollywood stars Rhea Chakraborty, Deepika Padukone and many others came out. Now, Ananya Panday who was summoned by the NCB after her chats with Aryan Khan who was arrested in a drug related case came out.

WhatsApp’s FAQ page states “WhatsApp has no ability to see the content of messages or listen to calls that are end-to-end encrypted. That’s because the encryption and decryption of messages sent and received on WhatsApp occur entirely on your device. Before a message ever leaves your device, it’s secured with a cryptographic lock, and only the recipient has the keys. In addition, the keys change with every single message that’s sent. While all of this happens behind the scenes, you can confirm your conversations are protected by checking the security verification code on your device.”

The data from the phone could be cloned to a computer and could be accessed using forensic tools. At the same time, an option is available to law enforcement agencies to approach Google and Apple with a valid court order and get the WhatsApp chat backups (unencrypted until recently) from them. These backups then could be taken apart in forensic labs.