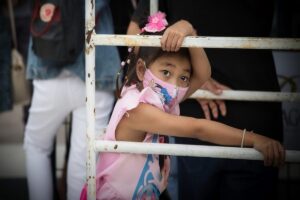 Kid with a mask

Well, everything about science is theories that are supported by facts. The COVID-19 second wave shook India. Even though the central government is stubborn at its incidence, state governments had no option but to impose a lockdown to control the spread of the virus. In that manner, the scientists already alerted people about the third wave.

One widely spread news about the COVID third wave is that it will affect the children. However, researchers claim there is no particular scientific evidence to support the above statement. If we observe the graph, the COVID first wave affected the old age people as they are vulnerable to most of the health complications and hence the virus had the maximum effect on that age group.

In the first wave, the youth are barely affected by the virus and their survival rate is very high. Coming to the second wave, most of the 45+ years aged people got vaccinated and they acquired immunity from the virus variants. This led to the infections and deaths of the youth in increased proportion in the second wave compared to the first.

So, on that basis, the governments alerted that the third wave will affect Children mostly as by that period most of the 18-44 years of aged people will get vaccinated. However, almost all COVID variants have shown no significant effect on the Children so far.

Unless there is a formidable variant that affects the immune system of the Children emerges, there is no concerning threat to the children in the third wave. However, it is advisable that the governments should find a way to get Children vaccinated as soon as possible.