You are here: Home / Politics / International / Why India’s Delta variant is too dangerous? 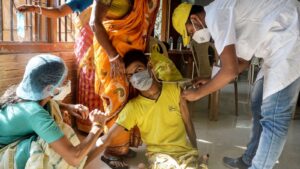 The corona epidemic is mutating in various forms which have become a challenge for medical science to predict its nature. Already many types of virus strains have emerged. The Delta variant, first identified in India, is now the most dangerous of all. Another name for this is type B.1.617.2. Its impact is much higher in Britain at the moment. Experts warn that if the government decides to relax the rules on June 21, they should reconsider their decisions.

Experts say that the SARS-CV-2 delta variant is more dangerous compared to other variants. Pharmaceutical expert Sam Fazelli said there were two reasons the strain could take a severe form. He said it was 40 percent mutant compared to the alpha type already found in Britain. Claimed to be more than 50 percent more likely than the first virus, it is believed to be more dangerous than the alphavirus. That is why the number of cases is on the rise.

The number of delta virus cases in Britain, which stood at 1 percent in April, has been steadily rising. About 70 percent of the cases registered by mid-May were of this type. He said that due to this variant, the number of hospital admissions is increasing. Said to be having a severe impact on youth, Sam believes vaccines may not have a big impact on this.

Those who took the first dose were said to have 30 percent protection. Pfizer estimates that 88 percent of the protection will be obtained against the Delta variant for its recipients and the Astrazeneca will provide 60 percent of protection if two doses are completed. Mentioned that some severity can be reduced with vaccines.

It is also learned that the severity of the delta virus in Britain was already exacerbated. Forty-two percent of those in the country said the strain was exacerbated by the relaxation of the lock-down even after vaccination. Others were of the opinion that sanctions should be imposed.

Giving vaccinations to as many people as possible and increasing the number of tests suggested studying genetic mechanisms are the possible ways before the making to counter the Delta variant.