You are here: Home / Politics / National / ‘Mixing Vaccines’ is a solution for India to fight COVID-19? 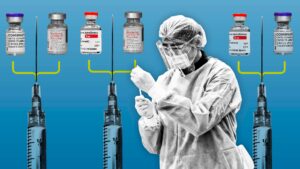 The fact has to be agreed that India is facing an acute vaccine shortage supply. Given the large population of the country, it has become a tough task to vaccinate more people that too in the middle of the wave. In the meanwhile, the vaccine manufacturing companies of ‘Covaxin’ and ‘Covishield’ have limited stock to meet the demands.

In these circumstances, India may look at the ‘mix and match’ formula that has been working brilliantly in foreign countries.

What is ‘mixed vaccines’ or ‘Mix and match’?

For example, if a person was administered his first dose with ‘Covaxin’ and gets his second dose from the ‘Covishield’ vial, it is known as the ‘mixed vaccine’ theory.

Is it safe and effective?

Efficacy: The people who are administered with mixed vaccines have shown greater immune response and the antibodies begun to generate within 14 days of the second dose. Clinically, this mixed vaccine doses phenomenon yielded encouraging results.

What is the theory behind it?

Some vaccines are effective against certain variants and some act well against the remaining. When the two types of vaccines were administered to a single body, an enhanced immune response will fight with all types of COVID variants and the generation of antibodies will be more diverse when competed to the non-mixed vaccine doses.

Where do countries stand on Mixing Vaccines? What about India?

The United Kingdom updated its COVID guidelines in January itself by stating that people may mix and match their two shots. They have allowed its citizens to use Pfizer and Moderna vaccines interchangeably.

Canada also announced that its people who have received the first dose of AstraZeneca Vaccine may receive the Pfizer-BioNTech or Moderna for their second.

USA has announced that clinical trials to be made to test the use of different COVID vaccines. In India, the data about this mixing vaccine is unavailable.