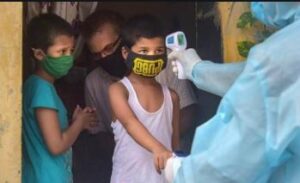 Dr Randeep Guleria, Director of the All India Institute of Medical Sciences (AIIMS), New Delhi,  made the statement while addressing the Health Ministry’s press conference on Tuesday, “If we look at all data, including Indian data from the first and second wave or even global data, there is no data to show that either the old or new variants led to more infection among children.”

He further added that, “According to the second wave data, out of all the children admitted to hospitals with Covid-19, 60-70 per cent had co-morbidities or low immunity, some were on chemo therapy. Most healthy children who were infected recovered without the need for hospitalisation.”

He said that,”It was seen in 1918, data shows that second wave was the biggest wave. Maximum deaths and cases were seen in the second wave but there was a smaller third wave also.”

He asserted that, “Lockdowns bring down infection but opening lockdowns lead to the possibility of a spike in infections.”

There's no evidence to prove that children will be affected in the #Covid third wave. According to the second wave data, Out of all the kids admitted in hospitals, 60-70% had co-morbidities or low immunity: @MoHFW_INDIA #Unite2FightCorona pic.twitter.com/pVkstNCH9L