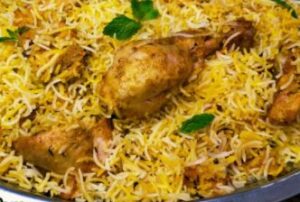 Biryani is synonymous with Hyderabad… People of Hyderabad love to gorge on Biryani and now the cost of Biryani is going to increase in the coming days. Want to know the reason…The return of Taliban rule in Afghanistan is the reason for the increase in the cost of Biryani as the popular Hyderabadi biryani is prepared with dry fruits and a variety of spices. According to the reports, the Taliban have stopped the movement of cargo through the transit routes of Pakistan. Due to this, the cost of spices and dry fruits sold in India is going to increase.

Now, the restaurant owners in Hyderabad are facing problem to get the spices and dry fruits from other markets due to shortage in supply. As a result, the price of biryani is going to increase. It is said that earlier, the cost of single Chicken Biryani would cost around Rs. 250 and now the price may increase to Rs. 350. TRS Plenary: The celebrations of two decades of formation of Telangana Rastra Samiti (TRS) and the party plenary went on a grand note. Everyone talked about the vent. The city of Hyderabad was drowned in pink and all roads lead to Hitex where the event was held. The one day plenary was attended by around 6,000 workers and leaders from across the state. All the top-wigs of the party were seen to have made it a point to attend this mega event.

Even as the workers were astonished by the arrangements that were made at Hitex, the party founder, K Chandrasekhar Rao was chosen unanimously for the ninth time as the party president. He continues to be the undisputed king of the party. Despite having such great reputation and leading the party from liberation movement to running a government, KCR seems to have lost fire in the belly.

This speech at plenary was watched out for by the party leaders and workers, but it seemed that KCR disappointed everyone. There was lack of Telangana sentiment in his speech. The scene at the plenary was such that the oratory skills of KCR didn’t bind people to seat through it, and many workers were seen heading towards the lunch area. Despite volunteers trying to stop them, many people were seen walking out, leaving many seats vacant at the venue.

Though it was disappointment, there were important decisions, amendments in the party constitution that were approved by the plenary without any hesitation. One such important amendment in the party rule book is that whenever party president is unavailable, the working president will handle all the party matters.

So this plenary was nothing but to pave way for KCR’s son and working president of TRS KT Rama Rao. It is known fact among the media and officials as well as TRS party leaders that KCR will not be available many-a-times. With this new amendment, KCR has handed over the baton of the party to his son. According to political analysts, slowly KCR would hand over the Chief Minister ship also to KTR and see that he becomes the next CM unopposed.

Telangana Rastra Samiti (TRS) plenary session this year marked the 20 th year of the party formation and it was celebrated in great fashion in Hitex, Hyderabad. Around 6,000 party workers from across the state participated in this mega event. The who’s who of TRS was all present on the stage and top leaders from districts came with their own contingents. Despite all the top-wigs present at the plenary, the most obvious missing was clearly visible at the event. The most important among the leaders who gave a skip to the event was T Harish Rao. The most trusted associate of TRS president K Chandrasekhar Rao, Harish rao was missing from this all important event.

Apart from Harish Rao, Koppula Eshwar and Gagula Kamlakar were not to be seen at the venue. Though many district leaders were seen gossiping about their absence, it was clear that KCR has given the responsibility of winning the Huzurabad by-election to Harish Rao and he with his team kept away from the celebrations to concentrate on the by-election campaign. So their absence is accepted and welcomed by the party cadre because TRS has taken this by-election very seriously and wants to win at any cost!

The others that also had taken up the by-election duty over plenary are government chief whip Balka Suman, MLAs G Kishore, Dharma Reddy; MLCs Palla Rajeshwar Reddy and Naradasu Laksham Rao. It is being said that all these were in the election campaign. This shows how much concentration is KCR and his party are dedicating on Huzurabad.

While all these leaders missing in action at plenary was not talked about so much, but one leader who was not seen was talked about a lot. It was none other than KCR’s daughter and MLC Kavitha. There were silent murmurs about Kavitha missing out on plenary and that too for a trivial reason of spending holiday at Dubai!

Kavitha went to participate in Bathukamma celebration at Dubai’s famous structure Bruj Khalifa on October 23. MP Suresh Reddy, RTC chairman MLA Bajireddy, PUC chairman MLA Jeevan Reddy, MLAs Shakeel, Ganesh Gupta, Dr. Sanjay were joined by MLC Kavitha, who witnessed the historical moment. The screening was also attended by several dignitaries from the UAE. After the event that night, she didn’t make it point to travel back to Hyderabad to attend TRS plenary, she is said to have stayed back for a holiday!

Are AP people asking KCR to take over the state?

The Telangana Rastra Samiti (TRS) which is celebrating 20 years of party formation is having its plenary sessions in Hitex, Hyderabad. The city has been decked up for the vent and over last fortnight many leaders and party cadre having working for this mega event. As anticipated the party chief and Chief Minister of Telangana K Chandrasekhar Rao once again became the president of the party.

Even as KCR traced the achievements in the state with TRS rule, he also took this as an opportunity to take a dig at YS Jagan Mohan Reddy and claim that the people of Andhra Pradesh were looking upto KCR and TRS to come to their state and even rule AP as well! After the introduction of Dalit Bandhu, KCR claimed, that many people in AP were asking him to come to their state and contest elections, so that after TRS wins that state could also have schemes like Dalit Bandhu.

KCR went on to say that the state of AP was reeling under electricity supply problem and was facing severe power shortage. “Whereas Telangana has become a power surplus state in the country,” he pointed out. He also said that AP had severe coal shortage and this was also the reason for power crisis.

But going by the pulse of the people, the general public say that they were never interested in another state leader to rule their state! “KCR must be doing a good job for their state, but his party and he himself are dedicated to Telangana and they have no say on other states including AP. It is unfortunate that he is imaging such things and trying make his illusions into a reality by uttering them in public meetings,” said Kamalakar Rao, senior NGO activist based in Vijayawada.

It is not just the people, ruling YSR Congress Party (YSRCP) leader and minister Anil Kumar Yadav retorted to the claims of KCR and dubbed it as a stunt to impress people of Huzurabad which is going to by-election. The minister said coal shortage is not just specific to AP, entire country is reeling under the coal shortage. “Today AP is termed as the number one state in implementation of welfare schemes, it is not right on part of KCR to claim that they were doing much better and hence people were inviting him to AP,” Anil Kumar Yadav said.

The AP minister concluded by saying that anybody was welcome to establish political party in AP and contest elections, there are no restrictions and objections from anyone. “But let us see what the result would be after the elections,” he added.