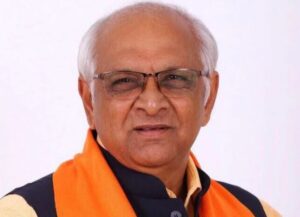 Union Home Minister Amit Shah congratulated Bhupendra Patel on his appointment as the chief minister of Gujarat. He tweeted, “Hearty congratulations and best wishes to Bhupendra Patel on being elected the leader of the BJP’s legislature unit. I’m confident that under the guidance of Narendra Modi and your leadership, Gujarat’s development journey will get a new energy and momentum and the state shall continue to be a leader in good governance and public welfare.”

Bhupendra Patel won as the MLA from Ghatlodia constituency, defeating Congress candidate Shashikant Patel in the 2017 Gujarat Legisative Assembly. He also served as a municipal councillor in Ahmedabad. He worked as the chairman of Ahmedabad Urban Development Authority (AUDA) and used to head the Ahmedabad Municipal Corporation standing committee.