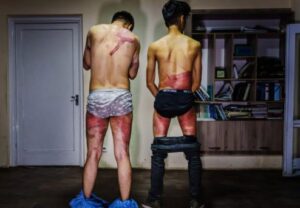 A large group of women raised slogans against Pakistan and protests took place on the streets of Kabul on Tuesday. Several journalists who were covering the protest were arrested and now photos of Afghan journos who were reporting on the Kabul protests were thrashed by the Taliban.

In a tweet, American journalist Marcus Yam shared a photo of the two journalists showing injuries all over the body. Yam wrote, “Painful. Afghan journalists from Nemat Naqdi & Taqi Daryabi display wounds sustained from Taliban torture & beating while in custody after they were arrested for reporting on a women’s rally in Kabul.”

According to the TOLO news, the Taliban detained its cameraperson Wahid Ahmadi and confiscated his camera. It is said that Taliban forces prevented some journalists from filming the protest.

According to Etilaatroz, Daryabi and Naqdi – a video editor and a reporter who was covering the protest led by women in the Kart-e-Char area of western Kabul on Tuesday, were abducted by the Taliban and taken to different rooms and thrashed and tortured.

“We were shouting that we are journalists. But they didn’t care,” Mr Naqdi was quoted by the LA Times, “I thought they were going to kill me. . .They kept on ridiculing us…” The Taliban also stopped the journalists from clicking the pictures of the protesting women.

According to the reports, three other journalists, including the local head of Euronews, a pan-European TV news network headquartered in France have been abducted.

All top positions were handed to key leaders from the movement and the Haqqani network, the group’s most violent branch and one known for devastating attacks. The Taliban had promised an inclusive government that would reflect the ethnic identities that make up the country.

Happy Diwali 2021: Messages, Quotes To Share With Your Loved Ones Diwali 2021: The festival of lights, Deepavali is celebrated with much joy and happiness across the country. Diwali is one of the biggest festivals for Hindus. This year, Diwali is celebrated on 4th November 2021. It is observed on the 15th day of the month of Kartika.

Diwali is the celebration of the victory of good over evil and knowledge over ignorance. Family come together and offer prayers, burst firecrackers and spend some quality time.

Here are some messages that you can share with your dear ones on the occasion of Diwali.

Light a lamp of love. Blast a chain of sorrow. Shoot a rocket of prosperity. Fire a flowerpot of happiness. Wish you and your family a sparkling Diwali.

May the divine light of Diwali spread into your life and bring peace, prosperity, happiness, good health and grand success. Happy Diwali 2020.

Let’s celebrate the festival in the true sense by spreading joy and light up the world of others. Have a happy, safe, and blessed Diwali!

All the lights of the world cannot be compared even to a ray of the inner light of the self. Merge yourself in this light and enjoy the festival of lights.

Just like the colours of rangoli, hope this Diwali brings new smiles, undiscovered avenues, and different perspectives and unbound happiness. Have a wonderful Diwali and a great New Year!

May the beauty of Diwali season fill your home with happiness, and may the coming year provide you with all that brings you joy!

Light over darkness, hope or despair, and the victory of good over evil in the world. Happy Diwali!

May Maa Lakshmi shower you with her choicest blessings and may you get rid of all your sorrows and agony this Diwali.Happy Diwali!

Warm Diwali wishes for every happiness to you. May the warmth and splendour, that are a part of this auspicious occasion, fill your life with happiness and bright cheer, and bring to you joy and prosperity, for the whole year.

May millions of lamps illuminate your life with joy, prosperity, health and wealth forever. Wishing you and your family a very Happy Diwali.

With the shining of diyas and the echoes of the chants, may prosperity and happiness of this festival of lights fill our lives.

May Maa Lakshmi, the Goddess of wealth shower you with the riches. Here’s wishing you and your family ahead of Diwali 2021!

May the beauty of Diwali season fill your home with happiness, and may the coming year provide you with all that brings you joy!

Red, blue, green, yellow; not one but all are my favourites. But the most favourite one is the bright colourful lamp of Diwali. Wish you a very colourful & bright Diwali! Diwali is one of the most important festivals for Hindus and it is celebrated to mark the victory of light over darkness. It is celebrated by Hindus, Jains, Sikhs and some Buddhists. Diwali is also called as Deepavali and it is the festival of lights.

The word Diwali is derived from Sanskrit which means row or series of lights. Deepavali is associated with Goddess Lakshmi and people perform Lakshmi Puja on the festival day for wealth and prosperity. There are many stories related to Diwali.

According to the Hindu calendar, every year, Diwali falls in the month of Kartika which is between mid-October and mid-November.

This year, Diwali falls on 4th November, 2021. In some areas, Diwali will be celebrated for three days where as in some parts of the country, the celebrations will extend for six days. Dhanteras is also known as Dhantrayodashi, Dhanvantari Trayodashi. On this day, people clean their homes and decorate the homes with flowers and rangolis.

Dhanvantari Trayodashi Puja is observed two days before Diwali Puja and it marks the birth anniversary of Lord Dhanvantari.

The fourth day of Diwali is Govardhan Puja. It is believed that Lord Krishna defeated God Indra on this day and it generally falls on the next day after Diwali Puja. It is also known as Annakut Puja.

The fifth day of Diwali is Pratipada or Bhaiya Dooj. In some parts of India, sisters perform Tika ceremony on this day and pray for their brothers long and happy lives. Bhaiya Dooj is also called as Bhatra Dwitiya, Bhai Dwitiya, Bhau Beej, and Bhathru Dwithiya. There are numerous legends related to the festival. Some believe that Diwali is the day Rama, Sita, Lakshman and Hanuman reached Ayodhya after a period of 14 years in exile.

Another story says that in the Dvapara Yuga, Krishna an avatar of Vishnu killed Narakasur, the evil king of Pragjyotishapura and released hundreds of girls held captive by the demon. So, people celebrated Diwali as a significance of triumph of good over evil after Krishna’s Victory over Narakasura.

One more story is that Goddess Lakshmi was born after the churning of the ocean of milk by the Gods and Demons. According to Padma Purana, Goddess Lakshmi chose the night of Diwali to marry Vishnu.

People of Eastern India believe that Diwali is associated with Goddess Kali who symbolizes the victory of good over evil.

People clean their homes, work places and illuminate the homes, temples and work spaces with candles and lanterns. The festival is also marked with fireworks. On the day of Diwali, people exchange sweets. Fabindia, one of the most famous clothing brands and it got embroiled in a controversy regarding their latest tweet. However, the tweet was now deleted. The deleted tweet reads, “The rustle of silk… gleam of zari. The sparkle of jewels… the fragrance of flowers in hair. The sweetness of mithai & happiness of homecoming. Let the festivities begin with ‘Jashn-e-Riwaaz”.

FabIndia had tweeted out the collection on October 9, with the post, “As we welcome the festival of love and light, Jashn-e-Riwaaz, by FabIndia is a collection that beautifully pays homage to Indian culture…”. In the photo posted by Fabindia, one could see men and women adorning traditional outfits.

The hashtag, #boycottFabIndia trended on Twitter and many users urged for an immediate boycott of the brand.

BJP Yuva Morcha President Tejasvi Surya said that “Deepavali is not Jashn-e-Riwaaz. This deliberate attempt of Abrahamisation of Hindu festivals, depicting models without traditional Hindu attires, must be called out… and brands like Fabindia must face economic costs for such deliberate misadventures.”

Uttarakhand MLA Rajkumar from BJP tweeted, “Deepavali is not Jash-e-Riwaaz…Period!!! Seems like Fab India has done this deliberately to hurt Hindu Sentiment.”

Fabindia released a statement that reads, “We at Fabindia have always stood for the celebration of India with its myriad traditions in all hues. In fact ‘Fabindia – Celebrate India’ is our tagline and also a wordmark. Our current capsule of products under the name Jashn-e-Riwaaz is a celebration of Indian traditions. The phrase means that, literally. The capsule is not our Diwali Collection of products. Our Diwali collection is called “Jhilmil si Diwali” is yet to be launched. Please do keep a look out. It is going to be beautiful.”