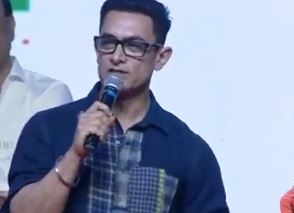 Megastar Chiranjeevi and Bollywood hero Aamir Khan attended as the guests for Love Story Unplugged. We all know that Aamir Khan and Naga Chaitanya will be seen in the film Laal Singh Chaddha. Aamir Khan said that he has seen the theatrical trailer of Naga Chaitanya and Sai Pallavi, a couple of days ago and texted Chay saying that it was fabulous and also asked him that whether he can attend the event that is going on today.

Aamir Khan said that they have been working together for the film Laal Singh Chaddha and working with Chay is very special. He said that he has taken the phone numbers of Nagarjuna and his mother Lakshmi to tell about Chay. He heaped praises on Naga Chaitanya and he wanted to tell everything about Chay infront of the extended family(fans).  He wanted to thank the parents of Chay for making him such a great person. He said that he and his team are going to miss Chay for sure. He said that he is very happy to see everyone and is also eagerly waiting to see the film, Love Story.